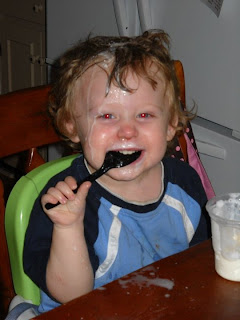 Saturday October 23, 2010 I attended Wyatt Benjamin Scalf’s Adoption Party. Tuesday October 19, 2010 I had the great honor and privilege of watching his adoption proceedings. The air was light. The judge was jovial! How often do you see a judge jovial? This was a happy day – a day of celebration. This was the day when everything I already knew to be true became true.

If you ask Wy to tell you his name he knows the routine. He puffs out his chest and recites what he has recited so many times, “Wyatt Benjamin Scalf”! He began to play with his name a few days after his adoption, saying it lower, then higher. He would cock his head and purse his lips…I was on the floor laughing. He got it! He was sort of over it. There had never been any question in his little mind who he was.

Saturday evening was wonderful. There were tones of people in celebration, kids running under foot, down slides, between tables, hot faced, sticky, sweaty…and full of life. The evening was simple… food, friends, & fellowship. This was a celebration!!!

It hit me when the slide show came on. I didn’t cry when Wyatt ran into my arms or “S” gave me opened mouthed kisses. However, seeing all the pictures of Wyatt throughout the close to the 3 years of this precious boy’s life was overwhelming. I fought tears. I finally just had to go talk to him, love on him in my way. I wasn’t going to be clingy, I wasn’t going to hog…but I needed just a moment to love him, just a moment to reign in my emotions.

I realized that I had been there when Wyatt had taken his first steps, said his first words, started making complete thoughts & becoming his own unique personality. I realized how uncertain we were in the beginning where he would be. I realized that he was indeed a miracle child, despite a horrific start to life he has become and intelligent, tenderhearted, soulful little being. God made him beautifully, perfectly.

The year and a half that I have been with the Scalf’s has been deeply impactful to my life. It has shaped me & formed me into a better human being, a better Christian, and a better Mother to my one day children. I am not Wyatt’s Mother, but I have the privilege of being his “Isa.” I told his speech therapist the other day that I didn’t care if he ever called me Ms. Melissa. I’m “Isa”! I have this special space with him…it is a space for just the two of us. I, hopefully, will leave as positive an imprint on his heart as he has left on mine. As all these children have.

My cup was filled to overflowing on Saturday. The impact hit me like a punch to the gut. I am infinitely grateful that Dave and Amy have entrusted me to LOVE their children. Of course, care for their day to day needs; make sure their safe, but to LOVE them like they are my own.

A typical morning looks like this. I go in fix coffee for Nanny. The boys are in bed watching cartoons. After a while Wyatt will say, “Isa?”

He is also very tenderhearted. One of my favorite things he says is, “Are you okay?” It is usually when you’ve hurt yourself or are frustrated. It is extremely concerned.

One morning I was speaking more to myself & said, “What is ‘H’ doing?” Wyatt responded with, “I have no idea!”

I’m overwhelmed by this treasure. He is truly going to grow up to be something incredible. I cannot wait to see what that will be.

…This is “Isa” signing off! I love you “Wy”…I love you Scalf Family!

Popular posts from this blog

Living in a Broken Dream

October 29, 2005
She clutched nothingness by the jugular while her meager vessel cut through the shimmering glass of this placid sea. Pouring out memories of reindeer hooves, campfire songs, chilly night swims, delicious sunsets, the kiss of a sunrise, and the unexplored passion of a first kiss she attempted to stay afloat above the throe. Her leaking paper cup wasn’t fast enough; spilling more back into the shell than desired, working feverishly she didn’t even notice the shore or the silhouette…a man reaching…reaching for her…

I’ve been dealing with the lack of feeling lately. That is the best way to describe it. My safe harbor is my mind, which incidentally is also a war torn land where great battles are fought and often lost. However, I have found a safe haven amongst the mortar blasts, debris, death, and devastation…a comfortable sort of numb that allows me to contend with my hallow dreams and broken heart. Like a cracked vessel that stands in front of the light she is to reflect rather than turni…
Read more

Let Me Share My Narrative With You (His Testimony!)

September 13, 2005
Well guys! Here it is! My testimony, or His testimony in my life! It is quite long...sorry...but I've divided it up in sections so hopefully it will make it easier to read. I hope that you will see Him fully reflected in this and that what ever ounce of me resides will be taken out I know this is long in coming, but I hope you enjoy....

Lord Father, this testimony is truly a testimony of You…it is not about me…


What a deep and beautiful gift to be intimately known by the Creator of the Universe…let me share a narrative with you, a true love story if you will…let me share with you the moment the Lover of my soul captured my heart leaving me forever changed.


I was born August 27, 1980 in Rome Georgia. I grew up Southern Baptist with a caring Mom and Dad and two amazing younger sisters that mean more to me than words can express. I was a very awkward child and struggled in my formative years with very low self-esteem and lack of self identity! Since I can’t take you through every single…
Read more

He Is My Portion!

July 23, 2005
"Two things I ask of you, O Lord; do not refuse me before I die: Keep falsehood and lies far from me; give me neither poverty nor riches, but give me only my daily bread. Otherwise, I may have too much and disown you and say, "Who is the Lord?" Or I may become poor and steal, and so dishonor the name of my God." - Proverbs 30: 7-9

An Excerpt from my Lord is My Shepherd Journal:

My Gracious Lord,
My Beloved Savior,
My Redemption and Mercy Giver,

Oh how my heart aches when I think of what I did to you last night! You were aching to spend time with me, to love me, to teach me, and I longed for that as well. However, I turned my back and chose a lesser easier road that left me feeling more empty and worthless than I did before! I feel in my heart of hearts You were trying to protect me from that, but once again my older more well-worn path was simpler. I am so very sorry and I truly seek Your forgivness for what I did!...

...Oh Father! How I desire for my fe…
Read more

Melissa
Lexington, Kentucky, United States
I'm a Christian who loves Christ with all her heart. I love to laugh, I love to cry (sometimes), I love to feel deeply. I want the road bendy & the windows rolled down. I want all the wick & wax gone. I want to live with reckless abandon. I want to have deep, authentic intimacy with others. My hope and prayer is that I will effect & be effected. This journey is my own!